Blaine, Minn. (July 9, 2018) – The 2018 Schwan’s USA CUP youth soccer tournament at the National Sports Center in Blaine will generate $36 million in economic impact during its nine-day run, July 13-21. The economic impact from visitors will be $28.1 million alone. Visitor spending will also generate a projected $233,515 in local tax revenue. 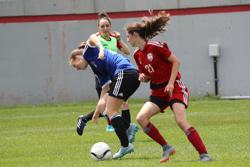 In addition to the teams, USA CUP attracts a diverse corps of referees. This year 170 international referees will represent 19 different countries, including nine countries not represented by teams.