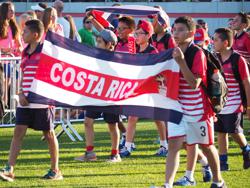 The Opening Ceremony for the 2018 Schwan's USA CUP will be held Tuesday, July 17.

“Until the NSC can add more playing fields, the tournament’s capacity is right about where we have ended up the last three years,” said Schwan’s USA CUP director Jen Een. “We are optimistic the NSC will build additional fields in the future, which will allow us to admit more teams.”

In addition to the teams, USA CUP attracts a diverse corps of referees. This year 170 international referees will represent 18 different countries, including nine countries not represented by teams.

Schwan’s USA CUP is held on the campus of the National Sports Center (NSC) in Blaine, Minn. The tournament is unique as the only tournament of its size in the world that holds all its games on a single contiguous campus. The 600-acre sports campus will offer 50 full-sized soccer fields. In addition to soccer fields, the NSC boasts a 5,500 seat stadium, an eight-sheet ice arena, an 18-hole golf course, and a cycling velodrome. Schwan’s USA CUP is the facility’s flagship event, its largest and most diverse.

In addition to soccer, the tournament is known for its ambitious program of off-the-field activities that include an Olympic-style opening ceremony, a daily video show and online newspaper, live webcasting of selected games, social and educational activities for the players and their families, and tours to Twin Cities’ tourist destinations. 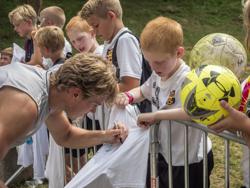 Minnesota United FC, who have their training grounds at the National Sports Center, will have a major presence at the tournament. The team will have an activity hub on campus, players will be doing autograph sessions, selected practice sessions will be open to the public, and some selected lucky USA CUP teams will get a behind-the-scenes tour of MNUFC’s locker room.

MNUFC will play two matches during Schwan’s USA CUP -- Saturday, July 14 vs. Real Salt Lake and Wednesday, July 18 vs. the New England Revolution. All the USA CUP players will receive a ticket to attend either of the games.

Other notable facts about the 2018 Schwan's USA CUP: 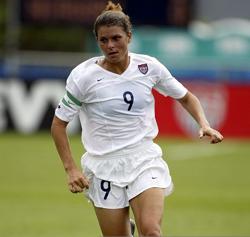 Mia Hamm in action during the USA's 4-0 victory over Norway at the National Sports Center in 2002.

U.S. soccer legend Mia Hamm will make a celebrity appearance at USA CUP on Wednesday, July 18, courtesy of Schwan’s Home Delivery. Hamm didn’t play in USA CUP as a youth player, but she has played at the National Sports Center six times with the U.S. Women’s National Team between 1990 and 2004, winning all six games against the USSR, England, West Germany (in 1990), Canada (2001), Norway (2002) and Australia (2004.) 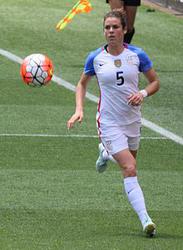 Which teams will travel the farthest to get to Schwan’s USA CUP? It’s the three teams from Dar-Es-Salaam, Tanzania who will travel 13,770 kilometers, or 8,537 miles.

The Schwan Food Company has sponsored USA CUP for the past 21 years, and Schwan’s will be honored with the USA CUP Founder’s Award this year, which recognizes long-term commitment and support of USA CUP.

The Red Bull SkyDive Team will be jumping into the NSC Stadium during Opening Ceremonies at 7:30 p.m. on July 17. This will be the first Schwan’s USA CUP appearance for the jumping team. Three boys’ teams from Bayamon FC, from Puerto Rico, hard hit by Hurricane Maria last year, will be honored at the Ceremonies and will light the cauldron.