Every team at USA CUP has a different journey to the largest youth soccer tournament in the western hemisphere. The 13 boys’ team from Colegio Inglés de Monterrey will be at Schwan’s USA CUP in July after winning their way to Minnesota.

“The league has only existed for one year and it continues to keep growing,” said Toyo Aguirre, USA CUP ambassador for Mexico. “The goal is to expand to five cities next season and eventually become a national league.” 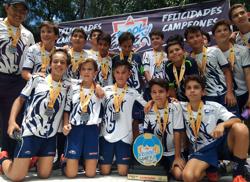 This year, there was a free trip for just the 13 boys division, but in the future the league plans on having more trips to USA CUP up for grabs.

“Next year, we plan on having three divisions with the free trip,” said Aguirre.

USA CUP is excited to welcome the team to Minnesota in July and hopes they come ready to play against U.S. teams.