When you think of Jamaica, you may think of reggae, Olympic champion sprinter Usain Bolt and beaches, but through Schwan’s USA CUP staff members’ Kelli Goodrich and Clinton LaBeau’s trip to the island nation, they found the country offers much more. They discovered not all of Jamaica is a resort for tourists, and there is a passion for soccer in Jamaica’s youth.

“It was really cool to see where teams are coming from and not what Americans see when they think of Jamaica,” Goodrich said. “We got immersed in the culture for a couple days and know the experiences they have had in life. I know it will be a totally new and memorable experience for these kids to come to USA CUP.”

The National Sports Center (NSC) boasts 50 full-sized fields with staff dedicated to maintaining their high quality, which will be something new for the teams coming from Jamaica.

“There they just need open space and they can play. There were kids playing on cement in the dark and they couldn’t care less,” Goodrich said. “They just loved the game and wanted to play, no matter what the fields are like.” 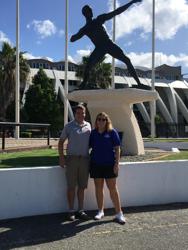 Keble Williams, a USA CUP referee from Jamaica, has wanted a NSC employee to come to Jamaica for many years to promote USA CUP.

“I have heard about Jamaican teams coming to USA CUP many years ago and wanted teams to start participating again,” Williams said. “Having Kelli and Clinton come to Jamaica was good for them to represent the tournament down here.”

Williams, who first came to USA CUP in 2007 with a group of 10 Jamaican referees, said his first USA CUP was an experience of a lifetime.

“When I first came there, I did not know anything about an international tournament,” Williams said. “I was pleasantly surprised with the tournament. I said to some of the guys ‘This is my World Cup. I may not ever make it to a World Cup, so this will count as mine.’”

While in Jamaica, Goodrich and LaBeau met with soccer clubs and schools in Kingston. They even made appearances on a national radio station and a television station to publicize USA CUP.

“They did a half hour segment on USA CUP on a national radio broadcast,” Goodrich said. “I even got a call from a USA CUP referee, who lives in Montego Bay, saying he heard me on the radio.”

There have not been Jamaican teams playing in USA CUP recently, but USA CUP has still maintained connections with people involved in the soccer community in Jamaica.

“Knowing people from Jamaica like Keble helps us find clubs and schools that are interested,” LaBeau said. “It is all about relationships, if we can go and support clubs in other countries, they will come and support us.”

Through their trip, Goodrich and LaBeau recruited two teams to come to USA CUP in July. Hillel Academy, the largest international school in Jamaica, will bring their 19 boys’ team. Also, St. Aloysius Primary School will bring a group of 9 boys’ players, who will split into two teams for USA CUP. 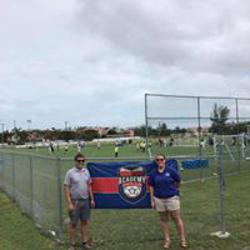 Williams said the older boys from Hillel Academy have travelled before, but it will be a completely new adventure for the younger players from St. Aloysius.

“Most of them, if not all of them, will be making their first travel overseas,” Williams said. “It will be an eye-opening experience for them. I am sure if the first time I came there and I loved it, as kids they will love it even more than me.”

After leaving Jamaica, Goodrich and LaBeau flew to the nearby Cayman Islands to re-establish long-standing connections. This year, there will be no teams from the Cayman Islands at USA CUP, but they will return in 2019.