Award is presented by Explore Minnesota, the state’s tourism agency

Blaine, Minn. (March 12, 2018) – During the 2018 Explore Minnesota Tourism Conference, held at the Verizon Center in Mankato March 6-7, 2018, the Schwan’s USA CUP youth soccer tournament was presented the award as the Minnesota tourism Event of the Year.

Several individuals, organizations and tourism businesses are recognized for their contributions to the state’s $15 billion travel industry each year by Explore Minnesota at the Excellence in Tourism Awards banquet. 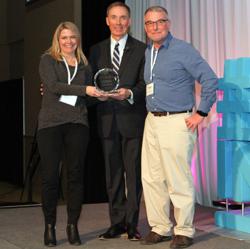 Schwan’s USA CUP, which is held at the National Sports Center in Blaine, Minnesota celebrated its 33rd year this past July, 14-22, 2017. Over the course of the tournament's history, over 20,000 teams have played over 56,000 games, while millions of visitors from across the world have called Minnesota home for two weeks in mid-July.

Over the history of the tournament, teams from 67 countries and 48 states have visited Minnesota to play in Schwan’s USA CUP.

The USA CUP media team understands that the reach of the tournament extends far beyond the 32,000 daily on-site customers. Friends and families around the world, while not in Minnesota, are watching and interested. The tournament makes great effort to connect with them.

These are highly-motivated “remote tourists.” That’s why the tournament offers creative ways for fans afar to look in on what’s happening at the tournament each day, including daily video features, a daily online newspaper, and live webcasting of selected tournament games. The tournament media team will even shoot photos of visiting teams’ game action and forward those photos to their hometown media outlets.

“This is a great honor for the Schwan’s USA CUP staff and volunteers,” said USA CUP Director Jen Een. “USA CUP has always taken its tourism mission seriously. We work hard to attract international and visiting U.S. teams. This award is a recognition of the fine work done by many people over the years to build USA CUP into the tourism force that it is today.”

Schwan’s USA CUP is the largest single tourism event held at the National Sports Center. But there are others. In 2017, the NSC tracked the numbers for 81 different events that generated tourism economic impact, adding up to a total of $79 million. (The NSC defines “tourism economic impact” as revenue derived from guests staying overnight, and does not include local spending.)