BLAINE, Minn. (December 7, 2017) – If you attended Schwan’s USA CUP in 2017, you know that major segments of the National Sports Center (NSC) campus were impacted by construction. The good news is that teams attending the 2018 tournament can expect most – but not quite all – of the major campus construction projects to be completed for the 2018 tournament.

“We appreciate how patient everyone was last year, and we are excited that the visitor experience should be much more streamlined in 2018,” said Schwan’s USA CUP director Jen Een

Last year’s tournament featured a turnout of 1,168 teams from 17 states and 15 countries, making it the largest youth soccer tournament in the Western Hemisphere. The event generated an estimated $27 million in visitor economic impact.

Among the improvements for 2018 will be additional parking spaces, improved traffic flow into and out of parking lots, and the installation of artificial turf on some of the fields.

Here is a breakdown of some of the changes: 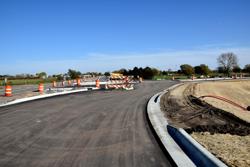 What used to be a potholed four-lane 50 m.p.h. road cutting through the NSC campus will be repaved with a single traffic lane in each direction. Two roundabouts are being installed to slow traffic down to about 30 m.p.h. The roundabouts are situated to allow access into and out of the NSC parking lots and the Victory Links golf course. This street reconstruction project is a City of Blaine project. It was started immediately after Schwan’s USA CUP concluded in 2017, and it should wrap up in June of 2018. 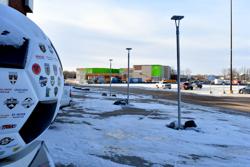 In this photo taken on December 7, 2017, the new Centerview Elementary School rises on the NSC campus.

At the 2017 tournament there was a fenced off construction zone on the west half of the Main Parking Lot featuring several massive piles of dirt. Admittedly, it wasn’t pretty. On top of that, a major traffic access road off Davenport St. was temporarily closed.

But by December 2017, the shell of a new Spring Lake Park School District elementary school had already risen from the dirt piles, the traffic lane reopened, and the outline of new parking lots appearing. By Schwan’s USA CUP in July of 2018, the new K-4 elementary school will be nearly completed, and the site will not be completely finished, but will be close.

Officially named Centerview Elementary School, the new school will ultimately become the new Schwan’s USA CUP tournament headquarters – unlikely in 2018, but confirmed for 2019. The paving of surrounding parking lots and landscaping will likely not be completed for USA CUP 2018, but will be finished in 2019. The traffic access road from Davenport St. has already been reopened, and will be open for USA CUP 2018.

The bottom line is that Schwan’s USA CUP staff and customers will have to wait until 2019 to utilize all the great benefits of the new school. But in 2018, the site will be cleaned up, traffic access reopened, and customers can get a good picture of what the future USA CUP headquarters will look like. 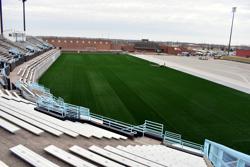 Here is an image of the turf installation in progress in the NSC Stadium. Two full-sized artificial turf fields will be open for Schwan's USA CUP 2018.

The NSC Stadium is being renovated with the installation of artificial turf on the full expanse of the stadium floor. The project is currently in progress, and the new fields will be ready for Schwan’s USA CUP 2018.

The 185,000 square feet of turf can be painted in any field configuration, for any field sport. For soccer, there is room for two full-sized fields, six small-sided fields, or a combination of both. The new fields will be ready for play in March of 2018.

The new stadium configuration will allow more room for the parade of teams at USA CUP Opening Ceremonies on July 17, 2018. You may also see some USA CUP games played under the lights in the stadium.

Additionally, a new top-of-the-line artificial turf field has been installed inside the Sports Hall, and will be used for the USA CUP Indoor Tournament. 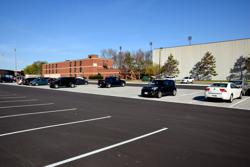 One small, but important, additional parking improvement for the 2018 tournament is that an access road will be open from 109th Ave NE into parking lots for the N and P fields. 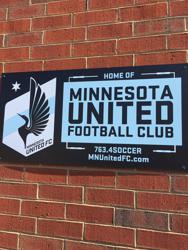 The National Sports Center is the home of Minnesota’s MLS team, Minnesota United FC. The team has built a new locker room in the east end of the Indoor Sports Hall. During Schwan’s USA CUP 2018, selected teams will be given behind-the-scenes VIP tours of the locker room.