Thirty-nine days ahead, 1,051 teams have registered for 2017 Schwan’s USA CUP

Blaine, Minn. (June 5, 2017) – The 33rd annual Schwan’s USA CUP won’t kick off until July 14-22, 2017. While registration is still open, with teams still signing up, a look six weeks out make this year’s tournament look as diverse and large as fans have come to expect.

The tournament is the largest soccer tournament in the Western Hemisphere. Last year’s total of 1,178 teams was a record. Beating that total will be challenging, but the USA CUP marketing staff is still hard at work recruiting teams. 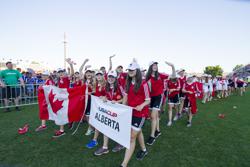 “Notable this year is a girls’ team from Spain and more teams from China that we have ever had,” said the Recruiting Director Aaron Schmidt. “We are confident we will have more international teams this year than we attracted last year.”

Schwan’s USA CUP is held on the campus of the National Sports Center (NSC) in Blaine, Minn. The tournament is unique as the only tournament of its size in the world that holds all its games on a single contiguous campus. The 600 acre sports campus will offer 50 full-sized soccer fields. In addition to soccer fields, the NSC boasts an 8,500 seat stadium, an eight-sheet ice arena, an 18-hole golf course, and a cycling velodrome. Schwan’s USA CUP is the facility’s flagship event, its largest and most diverse.