For the 13-year-old boys team from Rio de Janeiro, their week at Schwan’s USA CUP gives them experience at a large sporting event. But it's nothing compared to one they’re going home to – the Summer Olympic Games.

Back in 2009, Rio was announced as the host city at the 121st International Olympic Committee session held in Copenhagen.

And seven years later, with the Olympics just two weeks away, coach of the U13 Boys Rio de Janeiro Select, Neíse Abneu sees many positives to having this grandiose event in her own backyard.

"The Olympics is a good excuse for the government to put some money in for construction that has been put off for many years, like public transportation," she said. “The downtown city is totally remodeled, with trains and museums."

Though Rio de Janeiro is the host city, the entire country of Brazil is involved with the Olympic Games.

“Everybody's engaged with it. All the other cities, the other states in the North, South, East and West and center of the country have been through this experience with the torch,” Abneu said. “Not only famous people have been carrying the torch, a lot of people from the community, even the locals, get to be involved.” 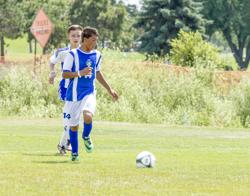 For the boys on Rio Select, the Olympic Games are something they’ve been looking forward to since they were 3 and 4 years old, as the Olympic Education Program has been integrated into their schools.

"The kids are excited. They enjoy the [Olympic Education] Program, learning new sports that would otherwise never get the opportunity to learn," said Abneu. "Schools are now teaching sports that are a part of Olympic value education, like badminton, hockey and golf."

And much like when the FIFA World CUP took place in Rio in 2014, this year’s school schedule for these boys is pushed back, and their first day of school will be on August 23rd.

“I think the kids are happy about that,” said Gelda Carvalho, a travel agent who has been arranging travel for Brazilian teams to attend USA CUP for years.

For both Carvahlo and Abneu, watching the Olympic Games will be quite accessible as they both live in the heart of this huge event, but for Abneu she’ll be even more up close and personal. She was invited to be a part of the famous Opening Ceremony.

"It’s a privilege and an honor,” she said. “I was invited to be a commentator. It’s not only a translation, but I get to put my thoughts on it.”

Abneu is looking forward to the event and already has a grasp on what people can expect from the ceremony.

“I will be in a press box for four hours speaking in English live on Arabic television, talking about the multicultural aspects of the OC,” she explained. “The Opening Ceremony will be a lot of dances about Brazil, a lot of cultural stuff.”

Throughout this 17-day event, which will boast 39 sports, Carvalho is most looking forward to Olympic volleyball.

Abneu is also a volleyball fan, but her sport of choice is beach volleyball.

And of course as a youth soccer coach, Carvalho has her eye on a medal for the Brazilian soccer team.

“Brazil has never won the Olympics in soccer,” she said. “It’s the only title we don’t have.”

For Rio Select, their time at USA CUP may be coming to an end, but as they head home to Rio, a new something, a bigger something, is just beginning.