U19 Girls from Colombia look to raise awareness and break barriers

Soon after the United States Women’s National Team raised the World Cup in Vancouver, the outrage started over why that team – one that garnered the highest-rated soccer match in American history – earned so much less money than the men’s national team that lost in the first round of the knockout stage. 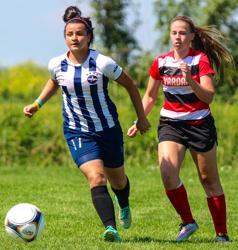 Yet, sadly, that doesn’t even compare to the struggles of many nations at the Women’s World Cup, even those that shattered expectations of their team before the tournament. One such team, Colombia, in just its second World Cup and drawn into a group with powerhouse France and upstart England, had virtually no expectations of success – in fact, it might’ve been considered a minor miracle for the team to get out of its group.

Instead, the Colombians became one of the biggest stories of the World Cup and pulled off the upset of the tournament with a 2-0 win against France in the group stage, making them an inspiration to clubs like Deportivo Gol Star, a U19 girls’ team from Bogota competing at USA CUP.

But back home, next to no one watched the Colombians make their Cinderella World Cup run.

“The (men’s team) went to the Copa America and the president gave them the flag and everything,” Maria Madiedo, a Gol Star player said. “The girls, they didn’t even say bye.”

While the men’s team gets a national celebration to leave for a continental championship, the women’s team received no recognition when it left for the tournament or when it advanced past the group stage for the first time in the program’s history.

That’s the struggle for women and girls in Colombia and dozens of nations where women’s soccer gets little to no recognition.

“We get no support in Colombia compared to what you guys do, so we don’t have these kinds of tournaments or professional teams or any of this,” Madiedo said. “It’s completely different coming to a serious tournament and actually looking for a scholarship to study because that doesn’t happen in Colombia.”

Gol Star is one of the handful of girls soccer clubs in Colombia that has produced players for the Colombian women’s national team, including multiple on the 2015 World Cup squad. Natalia Gaitan, a former Gol Star player, even captained the team in Canada.

But Gol Star’s mission goes beyond simply producing players. The club understands that there are much better ways to improve gender equality in the country than by simply producing great athletes. 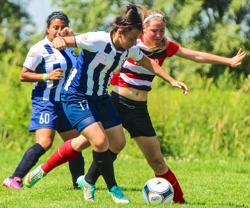 “It is known that in Colombia, women’s soccer is still in its beginning stages. These girls are not going to be able to derive their living from soccer, but it can help them realize their dreams because if affords them discipline, teamwork and how to set future goals,” a club statement reads. “For example, one thing many of them seek is to study at a U.S. university and play soccer at that university with a full scholarship.”

But the girls of the Gol Star squad at USA CUP have perhaps a little more to look forward to after this World Cup, especially after seeing some of their personal friends succeed on the world stage.

But when I ask Valentina Pinto, the team’s goalkeeper, what has changed as a result of the World Cup, she’s much more cynical about the future of the women’s game in Colombia.

“Nothing has changed,” she said. “Nothing at all.”

Yet, she is a bit more optimistic about girls who have the opportunity to leave Colombia and play soccer elsewhere.

“Our goal is to get scholarships, and some of us want to go to the national team to represent our country and play against professional teams,” Pinto says before the cynicism returns for a moment. “Of course, not in our country.”

And that’s why soccer is much more than just a game to these girls. Soccer means an opportunity to break the generations-long cycle of inequality that prevents most girls in Colombia from playing organized soccer. The women’s team plays to popularize the women’s game, and these U19 girls play for the chance to be the next generation of national role models for youth players. They’re playing to create a different kind of cycle – one that will replace the culture of inequality that has existed for so long with one that will continually breed new empowered girls that were inspired by the generation before them.