Globetrotting medical volunteer changing the world one country at a time

By Sunday, just hours after Schwan’s USA CUP champions have been crowned, Nick Maxwell will be landing in his third country this month.

“I got back at the beginning of July, and thought, ‘a couple of 80-hour weeks at USA CUP? Why not?’ And then I leave for Nigeria Sunday,” Maxwell said. 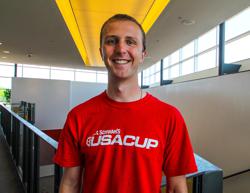 Nick Maxwell will find himself in three countries this July

The Creighton University student and USA CUP medical volunteer for three years returned from teaching a seven-week paramedic program in the Dominican Republic just days before USA CUP began, and he’ll be leaving just hours after it ends to do it all over again on a different continent.

Maxwell, a pre-med major, has traveled to Thailand, Peru and the Dominican Republic for medical classes and internships, and will now add Nigeria to his list as part of a program to build a new hospital, designed by Father Andrew Ekpenyong, one of Maxwell’s professors at Creighton.

Ekpenyong (or just Father Andrew, as his students call him) grew up in Calabar, Nigeria, and became an ordained priest in his home country before going abroad to get a master’s degree at Creighton and later his Ph.D. from the University of Cambridge. Father Andrew is now going back to his hometown to design a hospital, complete with cutting edge technology unavailable anywhere else in the country, or even the continent.

“His goal is to have it be a huge draw to bring people from other hospitals. The goal being if we can get them advanced on what would be the cutting edge for West Africa of emergency medical services and research, you can get people coming from the other medical schools to do residency there,” Maxwell said. “He’s looking to create a lasting relationship with Creighton University and their medical school for students to come down there.”

Maxwell says his involvement in the project happened by coincidence one day when handing in an assignment late at night. When the pair got to talking, Maxwell shared his experience working in medical programs abroad

“It was a total coincidence. I was handing in an assignment at like 9 p.m. and he was still in his office, and I asked him what he was still doing at the school,” Maxwell said. “We started talking about this and he learned about my background and it kind of all just went together. … He wanted me to come down earlier this summer, but I couldn’t because I was already committed to the Dominican.”

After spending nearly two weeks in the Dominican Republic teaching paramedic skills, Maxwell will now be teaching first responder skills to a handful of physicians, nurses and researchers who could potentially be employees of the new hospital in Nigeria.

“We’re going to teach a first responder or emergency medical responder level, which is much more rudimentary (than a paramedic class), many fewer medications, but very skills based,” Maxwell said. “Hopefully for future programs we’ll be able to get more advanced, but it was kind of one of those things where the circumstances aren’t ideal, but this is when the opportunity is happening. So it’s now or never, which is why we’re going with it.”

By partnering with hospitals and medical programs in the United States and Europe, Father Andrew hopes to create a program where hospital staff and foreign students can learn from each other to create a more holistic learning environment, something Maxwell said he has experienced in his medical studies abroad.

“When I was in the Dominican, I probably saw a machete injury every time I went into the hospital. Machete fights aren’t a thing in the States, they’re just not. So the things you run into are just completely different,” Maxwell said. “We’re hoping that it pans out into something bigger. The trick with a lot of these things … is creating institutionalized change. Once you leave, how are things different? That was the goal of our Dominican trip, that’s the goal of our Nigeria trip, to set something up that’s sustainable.”

As for Maxwell and his role in Nigeria? He’ll be teaching in Calabar for more than three weeks before coming back just in time for another one of his many activities.

“My buddy is getting married and his bachelor party is the Saturday before I leave. I’m going to that, leaving for Nigeria the next day, getting back the day of the rehearsal dinner, and I’ll be in the wedding the day after that,” Maxwell said. “I can’t really sit still. I always need something new to do.”