A lot has changed in 31 years of USA CUP, but one thing – one person – has remained constant on the field running sidelines and monitoring the center of the pitch.

Forster Davis, now 77, is his fourth decade as an official at USA CUP, and, by his count, is refereeing his 600th USA CUP match. Even now at nearly 80 years old, he’s still one of the most outgoing and energetic characters at this event and shows no signs of stopping his streak anytime soon. 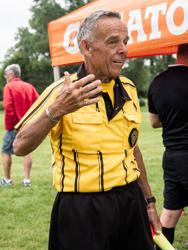 “This,” Davis says, pointing to two Chinese officials he’s working a game with, his explanation for why he keeps coming back every year. “A Chinese crew on the line. Last game, I had a team from Iowa and one from Yukon. Why not?”

But the serious answer isn’t always the first one you’re going to get when talking to a guy like Davis.

“I’d say something silly (keeps me coming back). Like the great bags or something like that. My grandkids – I give them the bags for Christmas – they’re saying, ‘Grandpa, we don’t need any more bags,’” Davis says before shifting back to a more reflective tone. “Where else can I work with Chinese referees? Yesterday I had a Jamaican ref and British ref. Where else am I going to do that?”

After 31 years at USA CUP there’s probably no field or age group that Davis hasn’t refereed.

“When I started, I was doing the U19 games. I got to do two games in the stadium, that’s a wow. And then to be asked back again? To do it one time, OK, but the second time, wow,” Davis says. “Now I’m doing U11 and U12 games, and that’s great too. It’s just a lot of fun. It’s either this or the treadmill, and I hate the treadmill.” 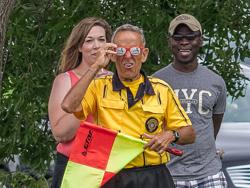 And Forster likes to bring that fun to fans off the pitch as well. As he’s running the line on the fans’ side of the field during a game I watch, he’s not shy about talking to fans during stoppages in play. He shares laughs with the fans and even puts on a pair of Schwan’s sunglasses for a bit.

“I enjoy, I have fun. At halftime we talk to parents and say, ‘Hey, we’ve got a line from China, we have a line from England, and we have a center from Minnesota.’ Where else are you going to get that?” Forster says. “Coming here, it’s just a thing. It’s like going to the state fair, why do you go to the state fair? Grandma’s cookies or something, I don’t know. It’s just one of those sorts of things.” 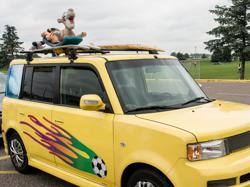 But Davis is most recognizable off the field when he’s driving to and from his home in Northfield 50 miles away, a drive he makes every day to referee at USA CUP in his yellow 2005 Scion, complete with a soccer ball decal on the doors, a wave decal on a window and a surfboard and Tigger figurine on the roof.

And once again, like he’s done all conversation, after a goofy moment discussing his “silly-looking car,” he takes a second, looks at the parking lot and shifts gears to reflect once more on his 31 years as a USA CUP referee.

“Think about it. We went from that first year with about 300 teams,” Forster says. “Nearly 1,200 teams this year, and you multiply that by 15 kids on a team, we’ll say eight parents per team. I mean, this is a city right here. No wonder they can’t find parking.”