Both young and old, these Hawaiians are at USA CUP Indoor to compete

As teams playing on the National Sports Center’s 46 full-size fields have begun to settle in at Schwan’s USA CUP, a handful of teams are just beginning their tournament.

The USA CUP indoor tournament began Wednesday and continues through Thursday, and Shockers, a team from Pearl City, Hawaii, will be playing in both the adult coed and men’s competitive divisions. But it isn’t the gap between Hawaii and Minnesota that stands out most about this team, it’s the gap between the team’s oldest and youngest players. 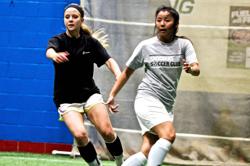 “Everyone going to college, some just graduated high school, summer plans. All that is pretty much how it happened,” one of the team’s midfielders, Carter Casuga, said. “We didn’t have enough players for a regular team (at outdoor USA CUP), so that’s why we made this team instead. And that’s why we’re playing with all the old people.”

And immediately after Casuga says those words, the team erupts. Half the players laughing, half of them voicing their displeasure. But that’s the banter on a team whose oldest and youngest players are separated in age by 15 years.

After playing for the same club in Hawaii, Shockers’ players and coaches stayed in touch, so when the current U19 boys’ team couldn’t gather enough players to compete at this year’s tournament, it called on a few club and USA CUP alumni to join them in Minnesota.

“We played four times in USA CUP and I guess they found an adult league. So the boys are all 18 and 19, and we’re all older,” said Amy Tanaka, gesturing to the team’s five players who are older than 20. “We all grew up playing in the same club, and the coaches are all the same from our girls and boys teams.”

And for the older players, even after they graduated college and moved across the United States, they stayed in contact with one another and were able to come together for USA CUP.

“We played on the girls team, they played on the boys team. We basically just practiced together. But (Amy Tanaka) lives in Maine now, I live in Oregon, and we kind of just put a team together,” Michelle Maeda said. “It’s exciting, but we haven’t really played in an indoor tournament before. Or together. At all.”

But practice time isn’t a worry for Shockers in any of their games. They’ve already got a foolproof strategy that Lawrence Robertson, one of the team’s midfielder’s drew up.

“We’re gonna keep the ball from the other team, we’re gonna score more goals than them, and then we’ll win,” Robertson said.

His not-so-groundbreaking strategy elicits a laugh from the rest of the team too, but not as big of a laugh as when I ask Cedric Silva about what it’s like to be the youngest member of the team.

“Well, since I’m the youngest, everyone likes to pick on me,” Cedric says, and immediately everyone in the room erupts.

And that’s the vibe from everyone on the team during my short time with them. Everyone is laid back, eager to joke around with one another and happy to be at USA CUP once again. But this is still a group ready to compete and familiar with success at USA CUP.

“There was one time when we played in the championship game and the boys were playing their championship game on the field next to us,” Tanaka said. “We had the same coaches, so they had to ask the refs if (the coaches) could be in between the fields, and they coached both games at the same time.”

And those coaches are back again at USA CUP joining their former club players once more, but this time in a different role on the team.

“They’re on the roster, so they can play too!” Tanaka said. “If we’re up by a lot, we’re going to make them go out there.”

All the coaches shake their heads and say there’s no way they’re going to take the field at any point, but I feel like it will happen, if only for a good laugh amongst the team.