However, few teams at USA CUP were more passionate than Avante Soccer, a U13 boys’ team from Rio de Janeiro, Brazil, and its cause against the fourth type of cancer targeted at USA CUP – leukemia and lymphoma. 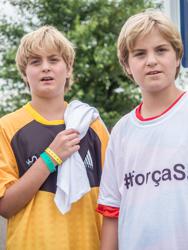 Francisco (left) and Daniel Carvalho from Avante U13 boys

Just days before leaving for USA CUP, one of Avante’s players was diagnosed with Burkitt’s lymphoma and was immediately sent to treatment for the disease, ending his chances of playing in USA CUP. Yet, Samuel, the boy diagnosed, is still a part of the team here, even if he couldn’t make the trip.

“It doesn’t matter that he’s sick or anything. He’s still our friend and we dedicate this trip to him,” says Daniel Carvalho, one of Samuel’s teammates. And especially on Kick Cancer Day, where every goal scored merits a donation to cancer charities, their cause is especially meaningful “Every time we score, we think of him. We speak with him every day telling him how the games are, how the people are and he’s very happy about it.”

After spending a year raising money to play in USA CUP, it was hard for Avante to come to terms with the diagnosis before leaving for the United States, but the team is still making the most of its trip.

“We got really sad and some people cried,” Francisco Carvalho, Daniel’s twin brother, said. “He said he was sad, but he wished us luck and to have a good trip so we could win this and give him the trophy. … We are going to win this for him.”

And as dedicated as the team is to winning the tournament, it is equally dedicated to contributing to a cause that can help their teammate through Kick Cancer.

“Every goal we score, it’s for him,” Francisco Carvalho said. “And we pray for him so he get back here and play with us again.”

And while Avante is doing everything it can to support Samuel, one of his biggest supporters is someone who won’t be taking the field at the National Sports Center.

Francisco and Daniel’s mother, Bettina, is a breast cancer survivor and was declared cancer-free about a year ago. She said that she’s thankful that she was able to overcome her diagnosis and travel with her two sons to USA CUP.

“For me, the first thing is to be alive, to be here with (my sons), to see them playing. It’s very emotional,” Bettina said. “But I’m cancer free for a year, and it’s just a blessing to see the boys and to be able to be here.”

As a result of her experience, she said she felt very compassionate toward Samuel after his diagnosis and had words of encouragement for him as he began his treatment.

The team also is showing its support for Samuel, nicknamed “Sa,” wherever it can at USA CUP by donning shirts it made that say “Stay strong, Sa” in Brazil’s native language, Portuguese.

“I told him about everything I went through when I was doing chemotherapy and I think he’s going to be fine,” Bettina said. “He’s only 12 years old, he has his whole life in front of him, and he’s going to be OK.”