The Canadian photographer who shouldn't be at USA CUP

“I think these are really going to turn oooout,” he says while going through his photos of Tuesday’s Opening Ceremonies, his Canadian accent as thick as ever.

I’m bleary-eyed, exhausted after a day spent from sunrise to sunset at USA CUP, absent-mindedly scrolling through emails on my phone. Yet, I can’t help but chuckle and wake up a bit after hearing that distinctly Canadian accent. 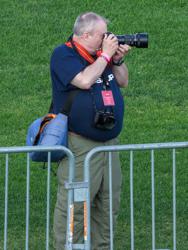 And I’m struck by these bits of Canadian culture a few times a day. He refers to the temperature in Celsius, talks about Mark Scheifele’s youth hockey program in Winnipeg, and we spend longer than we probably should discussing the business practices of Tim Horton’s and its potential expansion into Minnesota. But there’s one Canadian stereotype that stands out above all.

“Here take a Russian mint, I insist, they’re delicious,” he says to someone stopping by the media room for just a moment. And he doesn’t stop when they politely decline the offer, “No, really, you should try one, they’re all the way from Winnipeg.”

This is Garry Frankel, our volunteer photographer from Winnipeg, Manitoba.

Garry has been volunteering at USA CUP since 2005, making him one of the handful of “USA CUP lifers” that come every year and receive no compensation other than the fulfillment of being a part of the tournament.

“My sons played at USA CUP when they were younger, and I coached here once,” Garry says. “I shot photos for money 30 years ago and it began to feel too much like work. Now I only shoot for fun or for non-profit organizations.”

And Garry has a long list of organizations he’s worked for. Beyond USA CUP, he’s worked with the Special Olympics, KidSport, Soldier On, and many more. But even with so many organizations, USA CUP has a special meaning for Garry.

In 2009, Garry came to USA CUP, dropped his cameras off the night before he was supposed to start shooting the next day.

But Garry didn’t come back the next day.

In the middle of the night he went into cardiac arrest at his hotel in Fridley, Minnesota.

“My wife woke up and looked at me, and she saw me dead,” Garry said. “She immediately grabbed the phone, dialed zero and called the front desk.”

The security team with trained EMTs monitoring Garry’s hotel had just ended its contract to stop providing emergency services at that location. By a stroke of luck, the EMTs on staff were at the hotel’s front desk at that very moment telling hotel staff the contract had ended. When Garry’s wife dialed the front desk, the EMTs were at his room performing CPR in under 30 seconds.

“I don’t have any memory of any of this. In fact, I don’t remember anything for the entire week leading up to it,” Garry says. “The last thing I remember was a shoot I did for the Special Olympics about a week before USA CUP, but I only even remember bits and pieces of that.”

After going into cardiac arrest, Garry remained unconscious for nearly two weeks. Hospital staff revived him periodically during that time before his heart would fail again.

“I didn’t have a heart attack, I went into cardiac arrest. It wasn’t anything with my arteries or anything like that,” Garry says. “My cardiac arrest actually keeps me coming back to USA CUP and Minnesota. I was an EMT in the ‘70s and did my training here. I got all the treatment I needed here. I don’t know what would have happened in Canada.”

Garry says he’s not sure that he would have been able to receive the treatment he needed if he had been in Canada during our cardiac arrest.

“Our treatment in Canada, they pay for everything, but it’s slow. I don’t know if I would have received the treatment I needed in time,” Garry says.

During those two weeks in the hospital, dozens of people played a part in keeping Garry alive: Emergency responders, doctors, nurses. And Garry has met every single one.

Every winter, he goes ice fishing with the lead paramedic in the ambulance that picked him up from his hotel. When he comes to Minnesota for USA CUP, he meets as many of the medical workers as he can for dinner or drinks during the week.

“I stay in contact with every single person that touched me during that time. Anyone who had anything to do with keeping me alive, I stay connected with them,” Garry says.

And when I ask Garry if his experience gave him a new perspective on life, his answer perfectly reflects his respect for the people who have given what he calls “borrowed time.”

“I take for granted that I’ll wake up the next day, that I’m going to keep living,” Garry says. “What I don’t take for granted is what could have happened. There a lot of people like me who have the same thing happen and don’t make it. I was lucky. If I didn’t have EMTs standing in the hotel lobby or those lucky things, I probably wouldn’t be here.”