Some of our Schwan’s USA CUP customers (and staff and volunteers as well) were less than happy to discover Highway 65 in Blaine, coned off to a single lane Tuesday morning for lane painting. Highway 65 is a state highway, so the tournament staff contacted the Minnesota Department of Transportation (MNDOT) to inform them of the tournament, and to find out the schedule for reopening the lane.

MNDOT admitted the contractor didn’t know of Schwan’s USA CUP, and should have. In response, the contractor moved their work zone well north of the National Sports Center on Tuesday, and then scheduled the completion of the project in the area adjacent to the NSC for 4-7 a.m. so Highway 65 would be fully open ahead of the Wednesday’s opening games at 8 a.m.

Schwan’s USA CUP appreciates the quick response by MNDOT and their contractor. 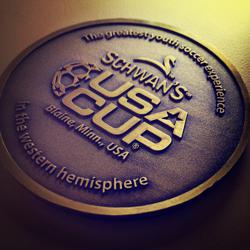 The Schwan’s Medallion Hunt is well underway, with two clues posted on Tuesday. The medallion has been hidden somewhere on the National Sports Center campus. The early clues are very general, and we doubt anyone will be able to find the medallion on day one. That’s intentional. But over the next few days, the clues will get more specific and serious searchers will be able to hone in on a location. Both the last two years, the medallion was found on Thursday, the third day of the hunt.

Visitors to the Twin Cities should know of the strong local tradition for a different medallion hunt, a contest that serves as a bit of an inspiration for the USA CUP Medallion Hunt.

Since 1952, during the St. Paul Winter Carnival each February, the St. Paul Pioneer Press runs the grand daddy of medallion hunts. The St. Paul Pioneer Press prints 12 clues in the newspaper on 12 consecutive days. Like the USA CUP hunt, the clues start cryptic and get more specific. The medallion is always hidden in a local park. Over the years, the medallion has been hidden in a diaper, a White Castle hamburger box, a pop can, inside an Oreo cookie, and frozen in ice.

Hunting for the Winter Carnival medallion is a tradition in some families, with multiple generations forming teams and taking days of vacation to search. Some of the regular teams are highly competitive. The finders of the medallion are awarded up to $10,000 and receive a place of honor riding in the closing Torchlight Parade.

We’re not quite that serious at the USA CUP Medallion Hunt, but the prize is worth competing for – BeatsSolo2 by Dr. Dre Headphones.