Brazil year after the World cup, a perspective from a USA CUP referee

Shortly after Mario Götze netted the game-winning goal against Argentina in last year’s World Cup final, Germany lifted the trophy, celebrated its fifth world championship, and the tournament ended for teams and fans alike. Yet, for Brazil, the tournament’s host nation, the World Cup sage continues. 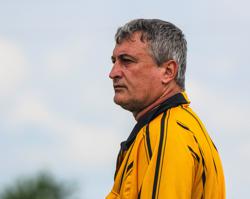 “Our government was using the World Cup to get some votes and I don’t like our president. I don’t care about the national team right now,” Brazilian referee Ramon Rodrigues said. “A little bit changed because when Brazil lost the World Cup, the people see a lot of corruption in building the stadiums, they see that our government paid money to FIFA.”

For many Brazilians like Rodrigues, who has refereed at 19 of the last 20 USA CUPs, Brazil’s 7-1 loss against Germany in the World Cup semifinal is considered a relief, and for some, even a victory.

“After the World Cup, the people woke from the dream and see the reality, and today the government has a 9 percent (approval rating),” Rodrigues said. “If we won (the World Cup), the people would still block their eyes.”

Allegations of political corruption in Brazil are now supported by arrests involving FIFA officials, many of whom played a role in awarding the World Cup bid to Brazil or in staging the tournament proper. And if an exorbitantly expensive World Cup already seemed shady enough, it got even worse when one of 14 people indicted on connection with FIFA corruption charges was Jose Maria Marin, who served as the Brazil Football Confederation’s president from March 2012 to April 2015.

“I’m ashamed of the people leading my country. Everybody is looking after himself, not after the country or its people,” Rodrigues said. “Our people are very passive. The corruption is a villain, and everybody sees the corruption and they do nothing because our people are like this.”

While protests in Brazil prior to last year’s World Cup became international news, continued protests have failed to gain the same global headlines or any major political reform.

While nearly 1 million Brazilians took to the streets this year in March – and again in April – to protest the nation’s corrupt government, Rodrigues says, with a population of over 200 million in Brazil, he is still not optimistic about the future.

“There was the same corruption under our president before,” Rodrigues said. “I am one of 200,000,000 people and cannot do anything alone.”

However, amidst the political turbulence in his home country, Rodrigues says he finds sanctuary in the United States and his time at USA CUP.