Minnesota’s to-be MLS team, Minnesota United FC, has played its home games at the National Sports Center Stadium since 2008 in various iterations, but a few United players were playing on the NSC’s marquee field long before their time as professional soccer players. 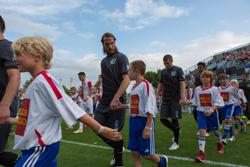 Brent Kallman escorted into the stadium before their July 11 match

Defender Brent Kallman and midfielder Jamie Watson are two of United’s players who played at Schwan’s USA CUP during their youth soccer career, though the two took different routes to get to the tournament. Kallman, a Minnesota native, played numerous times at USA CUP, while Watson had only one, albeit very memorable, USA CUP appearance.

Kallman also had one of his most memorable experiences of USA CUP on the NSC Stadium’s field in his final year at the tournament when he won the tournament as a member of Minnesota Thunder Academy’s U19 team. However, he says winning the tournament isn’t what he remembers most vividly.

“When I was 11 years old, we played a team from Mexico – I think they were called the Puma Juniors – and they absolutely destroyed us. It was like 11-1, and we got the ball in their box one time the whole game and got a penalty kick. I think the ref felt bad for us,” Kallman said. “It kind of opened my eyes to how good other players are from other countries. I guess it kind of knocked me down a couple pegs and made me realize, ‘Wow, I can get a lot better at this game.’”

That international presence, both Watson and Kallman said, is one of the things that stands out most about USA CUP and, at times, can even make it an intimidating tournament to play in. 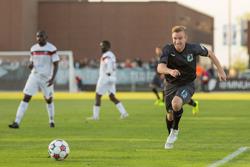 Jamie Watson earlier in the season

“Especially when you’re from here and know the tournament and how big it is and how big a reach it has globally, I think that not being intimidated, not being scared of the moment is the biggest thing. This is the same game we’ve played all the time,” Watson said.

“It was cool to see it from that perspective. Trying to coach against these other teams from other countries that don’t speak any English and trying to get – my young kids, especially – trying to get them to not be intimidated and just approach it like a normal game,” Kallman said. “I think when you’re a young kid it’s kind of overwhelming when you’re playing against all these teams that speak another language you might get intimidated, but it was really good for the kids to see that and experience another culture.”

Now removed from their youth soccer experience, Kallman and Watson say their experiences at USA CUP as adults have helped give them different perspectives on their youth career.

“You don’t realize it until it’s done and over, but tournaments like these are some of the best memories you have from your youth playing days,” Watson said. “I would really encourage kids to try to do as best they can when they’re playing and just enjoy all the memories of the tournament because it is something you will look back on one day and really appreciate the memories that you’ve made. That’s a hard thing to tell yourself in that moment, but live it up and enjoy every single moment that comes with this tournament.”