On a hot, sticky championship Sunday at the Schwan's USA CUP Weekend tournament, Adrienne Richardson was the engine that powered Minnesota Thunder Academy to a 3-0 win over Fire SC in the U19 girls’ division, while Sweden's Rudbeckianska edged Sporting St. Croix from Minnesota 2-1 with a game-winning goal in extra time in the U19 boys’ division. 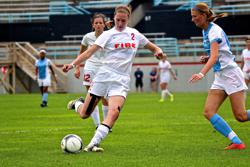 Before the pair of humid championship games at the NSC Stadium, however, cloud cover made for a set of relatively cool semifinal games that, in the U19 division, saw one of the tournament’s perennial championship contenders, Tokiwagi Gakuen from Japan, eliminated from the competition.

In a matchup between Fire SC’s size and athleticism and Tokiwagi’s speed and skill, Minnesota's Fire needed penalties before finally notching a 2-1 against the Japanese side.

“We had five defenders, that was our game plan. Play defensive and hold it off,” Fire SC’s Macy Violett said.

And hold of Tokiwagi, they did. After scoring the game’s opening goal, Fire conceded possession to Tokiwagi for virtually the remainder of the game, recording just a handful of shots during regulation and extra time. Despite the possession deficit, Fire held on and advanced after six rounds of penalty kicks.

“We knew we would be able to win balls in the air and play that way because they’re obviously a bit smaller,” midfielder Megan Charlton said. “Our sixth shooter, she was pretty nervous walking up there, and we just told her to stay calm, and she scored the winning goal.”

Yet, after defending for 90 minutes against Tokiwagi, Fire couldn’t do the same against MTA.

After a scoreless first half, MTA’s Adrienne Richardson took control of the game, helping to set up two headed goals shortly after halftime before adding a goal of her own, giving MTA a 3-0 championship win.

“We defended well overall through the tournament, we only gave up two goals in all the games, so our team defending was key for us,” MTA coach Dan Storelin said. “We were just trying to stay patient, not get frustrated. We knew we had a lot of the ball more of the chances and stuff, and eventually a goal would come. We thought once we got one, we’d get a few, and that’s kind of what happened.”

As far as next year’s tournament, MTA brought its U16 team to the USA CUP weekend tournament, meaning they’ll have the opportunity to come back and defend their title.

After MTA cruised through the second half of its championship game, it seemed that Rudbeckianska would do the same in the U19 boys’ championship. 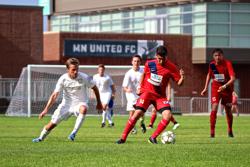 The team from Vasteras, Sweden, started fast against Minnesota’s Sporting St. Croix, creating two dangerous chances in the game’s first five minutes. Rudbeck opened the scoring just before the ten-minute mark with a goal on a break through the midfield from Douglas Karlberg.

“We talked about the first ten minutes as a team, saying that we’re going to have extra focus, we’re not going to let anything through, and of course we wanted to score,” Rudbeck coach Peter Jexby said. “We wanted to attack and move as a team because it’s so boring to work without the ball. Especially in this heat, it’s better to play with possession.”

St. Croix found its footing shortly afterward, however, and leveled the score eight minutes later when a nifty back heel on the edge of the box put a St. Croix attacker through the Swedish back line, forcing a Rudbeck defender to concede a penalty kick. St. Croix’s Shae Bottum netted his penalty, knotting the game at one just 17 minutes into the game.

“We talked about it at half. We said it’s 1-1, it’s all up to us. It’s up to us to go out there and show that we’re going to win this. A lot of it is about mentality in these types of games,” Jexby said.

And it stayed knotted at one for the rest of regulation time. While both teams had numerous looks at goal, neither team could finish its chances, sending the game to extra time.

But Rudbeckianska needed just a few moments in the first period of extra time to break the tie when Viktor Lundmark took a seemingly harmless shot from the left side of the penalty area that snuck under St. Croix goalkeeper Tommy Molski.

“I thought we were the better side in the second half. They were tired and we moved the ball very well,” Jexby said. “But they were a very strong team. They were a good matchup, and they were very fun to play. They have a lot of speed, like us, and good players, so it was a good matchup. It was fun.”