USA CUP regulars will probably be familiar with Tokiwagi Gakuen, the U19 girls’ team from Japan that comes to USA CUP every year and produced three members of the nation’s 2011 Women’s World Cup-winning team. However, local tournament attendees might also recognize the team’s liaison, Seigo Masubuchi, for his job with the St. Paul Saints, the Twin Cities’ independent baseball team. 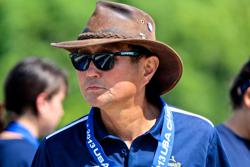 Seigo on the sidelines during a Tokawagi match

When he’s not chaperoning Tokiwagi’s coaches and players around the Twin Cities during USA CUP week, a job he has held since the team began playing at the tournament in the late ‘90s, Masubuchi spends his summers at Saints’ games as the team’s “international Ambassador of Fun.”

What exactly does an Ambassador of Fun do? Everything from wearing mascot costumes, singing karaoke and acting in skits that the team holds in between innings of games.

“Some people really think that’s the only thing I do because they only see me there,” Masubuchi says. “But the team only plays from May to September. They have 50 home games. How can I pay a mortgage with that?”

And like the jack-of-all-trades he is, Masubuchi’s job with the St. Paul Saints is just one of the jobs he holds in addition to working at USA CUP and as a coordinator between U.S. and Japanese businesses.

“The Saints are well-known for marketing, fan services, wacky promotions, that kind of stuff. Because of their baseball business, people in Japan know about the St. Paul Saints,” Masubuchi says, and this international recognition helped Masubuchi get a job with the team. “The Japanese media came to study and write an article about the wacky stuff the St. Paul Saints do, so after that article went out in Japan, a Japanese player wanted to play for the Saints, so I helped set that up and helped other Japanese players come to the Saints.”

After Masubuchi helped Japanese players join the Saints, the team asked him to join their entertainment team.

And if all his work with an American baseball team and a Japanese soccer team isn’t enough, Masubuchi is an accomplished distance runner who has completed 56 marathons, and in 2011 he was able to combine running with his baseball and soccer interests to set a world record.

“When Japan had the tsunami disaster, Sendai was one of the hardest hit areas, and Sendai is where Tokiwagi is,” Masubuchi says. “So I was thinking about raising some money for Tokiwagi and the Sendai area, and I was reading Runner’s World magazine and there was a story about a guy who ran a marathon with a dog mask on. He ran it in something like four hours and 20 minutes, and I thought, Oh, that’s interesting.” 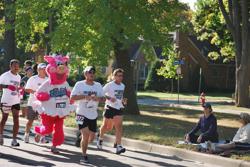 That time of four hours and 20 minutes was, at the time, recognized by Guinness World Records as the fastest marathon run while wearing a mascot costume. That’s when Masubuchi decided to break that record in the Twin Cities marathon while running as Mudonna, the St. Paul Saints’ mascot.

“I was running one day and I connected the dots and thought, why don’t I run as Mudonna since I can get the costume and then raise money for this Japan disaster?” Masubuchi says.

After St. Paul Saints and Twin Cities Marathon management approved the stunt, Masubuchi donned the costume and took off on one of his most difficult marathons to date.

“I was hoping to break 3:50, but – the costume obviously isn’t meant for running – the legs were squishing my calves and I started cramping around the St. Paul Cathedral, the final stretch where you start going down the hill, and especially when you’re cramping, it’s tough to run downhill,” Masubuchi says. “I got to the Cathedral – I could see the finish line – and it took me like 15 minutes to reach the finish line because I was cramping and couldn’t move. And since I was near the finish line, I could hear the race emcee saying, ‘Oh, Mudonna’s having trouble.’ I just couldn’t move.”

Despite the difficult final leg of the race, Masubuchi was able to make it across the finish line in just over four hours, adding “world record-holder” to his long list of personal accolades.

And while Masubuchi says his “go with the flow” personality allows him to manage so many different jobs at once, USA CUP forces his duties to overlap every summer, and it doesn’t go unnoticed by St. Paul Saints fans.

“Usually the team has a few games during USA CUP when I’m with Tokiwagi and I can’t go to the games,” Masubuchi says. “So fans make up stories like, ‘Where’s Seigo? He must have gone back to Japan.’”