History lesson: the history of the NSC property is a tale of wealth inherited then lost, a farm, and one of the world’s major hotel chains

At the National Sports Center (NSC), we’re often asked what this land in Blaine, Minnesota looked like before a 600 acre sports campus was built. The easy answer is to say, “sod farms,” which is true, but only in recent decades.

On the east border of the NSC is Radisson Road, and yes, it’s named after the Radisson Hotel chain, and yes, there is a direct connection. The early history of the NSC land is one of wealth inherited, wealth squandered and lost. And finally, success. But we’re getting ahead of ourselves. 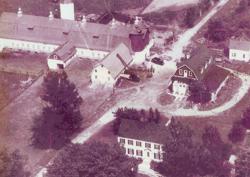 Aerial view of what is now Radisson Rd. (running from bottom to top of photo) and 105th Ave

Long story short, in 1905, a woman named Edna Dickerson of Chicago, was a sole inheritor of the $1 to $2 million estate from a distant cousin. Reports of the time painted Edna and her husband as somewhat reckless managers of their fortune, a fact made clear when civic boosters in Minneapolis talked them into investing virtually their entire estate into building a luxury hotel in downtown Minneapolis.

Built at a cost of $1.5 million, the Hotel Radisson (named for French explorer Pierre Esprit Radisson) opened in 1909.

The connection to Blaine came a few years later. In 1914, Edna and her husband established the Radisson Farm, located at what is now the intersection of 105th Ave NE and Radisson Road, right on the NSC campus. The farm was built to grow produce to serve at the Flame Room, the Hotel Radisson’s restaurant.

The hotel, restaurant and the Radisson Farm operated until 1934, when it was foreclosed by the bank, due to mounting debt and the effects of the Great Depression. Edna and her husband went broke, but the Radisson Farm re-emerged as a going concern in 1946. Local farmer Stanley Skiba purchased the land from the bank and successfully operated the farm until 1959 when the land was taken over by the Metropolitan Airports Commission through eminent domain to build what is now the Anoka County Airport. The Skiba family finally moved from the farm in 1962 and their farmhouse was moved to a different location a year later.

The Radisson Farm is long gone, replaced by soccer fields and an airport. Radisson Road, a gravel path which cut through the middle of the original farm, is now a four lane, 50 m.p.h. highway. And the Radisson Hotel chain has grown to 420 hotels in 73 countries, with some healthy original roots to Blaine, Minnesota.