Meet the “Alaska” team that is from a lot of places, mostly not Alaska

When comes to soccer, a sport that requires 11 players to think alike and come together for a common cause, many people would argue that team chemistry can make or break a team. Some would even argue that that chemistry can only be achieved through weeks, sometimes even years of training together.

But that isn’t the case for one team at Schwan’s USA CUP. 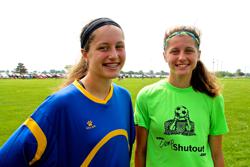 While the club is based in Anchorage, just four of the players on this U16 girls’ team are actually from Alaska. The rest have joined the team after stints as guest players and continue to travel to tournaments around the country.

“Last year, I came to this tournament as a single player and I just got put on their team from the guest player program,” Taylor Wilpolt, a Colorado native who played for Select Chicas for the first time in 2015. While using guest players wasn’t the team’s original goal, it has since embraced it and is now part of the team’s identity coach Steve Day says.

Britta Gardner (left) and Makayla Jackson (right) both joined Futbol AK from New Braunfels, Texas. They began playing with the team in 2012.

“Out of necessity is how this started. We only had about four or five girls from Alaska that play anymore at this level, so in order to keep them playing together I had to find some guest players. So we started using (the USA CUP) guest player pool and met girls over the years, and they’ve repeated tournaments with us ever since. Every time we go somewhere they call and say ‘we want to go,” Day says, and even after playing just one tournament for Futbol AK, players can get hooked on the fun and inviting team dynamic, including Wilpolt and her family. “Shortly after our last game her dad approached me and said ‘Anytime to travel anywhere, Taylor would like to go if you have a spot.’ She’s been with us to two or three tournaments since and it’s been awesome.”

And it’s that fun dynamic that keeps the team together and ensures that players from anywhere can fit right in.

“It’s definitely a great experience. I like the memories we make. It’s like a family from all over and then you see them once a year,” Alexis Mckinnon, one of the team’s few Alaska natives, says. “You’re more excited to come to this tournament because you only see them once a year. And after the first couple games we just click … You can get sad (during the offseason) because you see them (on social media) and you start to miss them.” 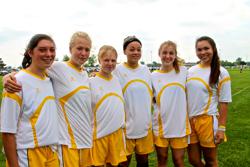 Almost all of the players use the word “family” to describe the team at least once, and when I finally ask what makes Select Chicas a “family,” a lot of the players credit Day for the way he runs the team and the camaraderie he fosters.

“He’s like a coach, but he’s more like a family member, I guess. That’s how he treats us, like we’re family,” Walpolt says. Makayla Jackson, a native of New Braunfels, Texas, who’s played with the team since 2012, says Day’s friendly demeanor comes through during games too. “He’ll tell us what we need to do, but he’s welcoming about it. He treats us all the same way regardless of where we’re from or how long we’ve been with the team.”

And, while talking to Day, it’s easy to see why the players respond so well to him. The soft-spoken coach is easily one of the nicest people I’ve met so far at USA CUP, and his commitment to creating a positive environment for the players is clear when he talks about his approach to coaching.

“Basically our only rule is that you get along with each other and you have to like what you’re doing,” Days says. “Your parents spend a lot of money to come to a tournament like this, and if you’re miserable and don’t get along, it’s not worth the time or money or effort. So I just try to stay really laid back.”

And about that chemistry that club teams supposedly need to be successful?

“Coaches (in Alaska) think I’m crazy. They don’t understand how it works. They say, ‘But they’ve never played together!’ But our philosophy is, it’s soccer. A bunch of girls the same age playing a game you all love. It’s not brain surgery, you know?” Day says. “So it’s been really easy. They come together, we have a little kick-around the night before and they’re ready to go. It makes coaching really fun.”