Or at least there were until just last week when Bill Neiss, the Spring Lake Park Opportunities in Emergency Care program director who is working at USA CUP, joined a team to help teach a paramedic class in the San Juan province of the Dominican Republic.

“It was the first paramedic class in the country. They don’t have any training down there, so we were part of a team,” Neiss said. “The class was seven weeks, so we were there for the last three.”

Neiss and others helped train about 20 students in the class that began as part of a project to build a new hospital.

“It started out through a ministry. I have a friend of mine – gosh, I’ve known her since she was a kid and now she’s a missionary down there – and they do medical (work) in new barrio clinics,” Neiss said.

“They’re in the process of starting a new hospital. And we started asking them, ‘Well what about ambulance service?’ And they said, ‘Well, it’s really not on our radar yet,’” Neiss said. “So last August we were down there, got a tour through the hospital.”

Neiss pauses for a moment, the memories of that hospital visit in San Juan going through his mind, before choosing his next words.

“What can you say? You’re going back in time.”

After that visit, Neiss began working with others in August, nearly nine months before the first day of class, to start preparing a plan and gathering the supplies necessary to make the program possible. 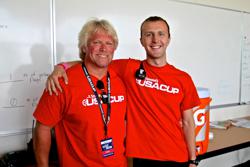 Bill Neiss (left) with Nick Maxwell, who also accompanied him on the trip

“We generated a list of supplies we needed and equipment, and then we started hitting up hospitals and ambulance services for any donated supplies we could use,” Neiss said.

The language barrier proved to be one of the more difficult obstacles to maneuver when teaching and gathering supplies.

“There was one EMT book written in Spanish, so that’s what we used. … Everything we would teach, we would speak for a sentence, and then it would get translated, so everything took a little longer.”

In fact, nobody on the teaching staff spoke Spanish, the Dominican Republic’s dominant language, so the few students who spoke English would have to translate the lessons for their classmates while learning the same material they were translating. When it was time for tests, the teachers needed the English-speaking students to re-write the tests in Spanish before the teaching staff gave the English speakers a different version of the test.

Despite the extra work to make the class possible, the students remained committed the entire time, Neiss said.

“The attitudes of all the students were really upbeat. They all wanted to learn,” Neiss said. “To come in nine hours a day for seven weeks, it’s a grind. And some of them would work nights, and they would ask permission, ‘I’m going to be late in the morning because I don’t get off of work until 8 a.m. I’ll be there at 8:20.’”

Not only was it a challenge just to complete the class, the teachers and students didn’t even notice if the Dominican Republic’s Ministry of Health would recognize and certify the program until its final day. On the last day, the Ministry of Health sent a representative to observe some of the skills taught during the program, and it was on that day that Neiss said he had his most rewarding moment of the class.

Toward the end of the program’s final day, the Ministry of Health representative asked one of the students what they thought of the class. That student responded, and soon after, though unprovoked, every other student shared their story and explained how thankful they were that they had the opportunity to receive paramedic training.

“Thankfully I had someone translating for me what they were saying, but it was one of those moments where it was like, ‘Yup, it was all worth it,’” Neiss said. “Every hot, sticky day with no air conditioning, every bowl of rice and beans, it was worth it.”

After spending three weeks teaching in the Dominican Republic, Neiss returned to the United States just few days before the start of USA CUP, where he will be working for the 30th year.

And where will Neiss be a month from now? In the Dominican Republic, doing the same thing all over again.

“My wife went on a mission trip for the first time last year and she finally said, ‘Now I understand. Now I know why this means so much,’” Neiss said. “You can hear stories, you can see pictures, but you just don’t understand what it’s really like until you actually see it.”