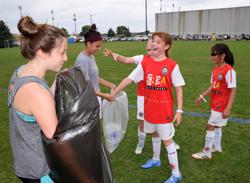 One of the challenges that all major festivals and events face is managing waste and encouraging recycling. Schwan’s USA CUP is trying something new this year. Rather than placing hundreds of recycling bins around the campus, each team received two plastic bags – a black bag for trash and a clear bag for recycling. Teams clean up after each game, and then the coach or manager can drop the bags at major drop locations around the campus.

“By asking teams to manage their own recycling, we think we can get greater compliance, and minimize mixing of trash into recyclables,” said Hannah Van Eendenburg, the National Sports Center’s Green Corps Recycling Corps Member.

The NSC’s media team stopped by field U3W on Saturday afternoon as the Keliix Intra U10 team faced off against the Thunder Bay Chill. Following the game, the players picked up their trash and recycling. For coach Grace Goepfrich, of Minneapolis, it was an opportunity to do a little non-soccer coaching.

“It’s important to take responsibility at a young age,” said Goepfrich. “It’s something as simple as putting the recycling in the bags that are provided. It’s easy and it’s good practice.”

Van Eendenburg reported that over 2,000 pounds of recyclables had been recovered over the first two days of Schwan's USA CUP. 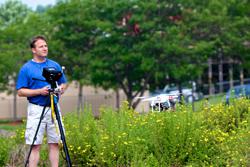 The Schwan’s USA CUP media team was working with North Metro channel 15 (NM15) to gather some aerial video footage via drone on Saturday. NM15 drone pilot TJ Tronson shot some general views of the campus, and even flew high inside the Sport Expo Center.

The NM15 drone will return on Tuesday night to gather aerial video of the Opening Ceremonies.

“Drone photography works really well for us at USA CUP,” said National Sports Center graphic designer Rob Lodge. “We used to rent a helicopter for aerial photography, but the drone can fly lower and get better images.” 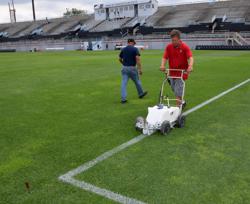 On Saturday afternoon at 4:10 p.m., the final Schwan’s USA CUP game of the day wrapped up on the stadium field. Seconds after the players cleared the field, the NSC turf crew sprang into action. They had barely an hour to prepare the field for a professional soccer game that night, Minnesota United FC vs. the Ottawa Fury.

“We’re mowing, blowing and painting,” said Jeff Meihofer, a technician on the NSC turf crew. “We were even working last night, hand watering after the last game.”

But on Saturday, Meihofer said they’d leave the field dry for the game.