While some teams are just settling in on the first day of games at Schwan’s USA CUP, others, including Norway’s IL Bjarg, which posted a win (4-2 against DUSC from Bismarck, N.D.) and a draw (1-1 versus Hudson, Wis.) in their first day of the tournament, have already been in Minnesota for more than a week. 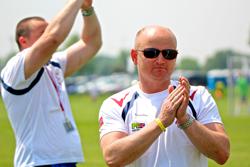 IL Bjarg head coach Joergen Brandshaug shouts encouragement to his players from the sideline. Brandshaug said one of the things he was most excited about at USA CUP was being able to visit his father, who lives in the Twin Cities.

Hailing from Bergen, the second-largest city in Norway, Bjarg is playing at USA CUP for the second time in four years – albeit with an entirely new group of players this time around – and has spent most of the last week in Duluth as part of a homestay program with the Gitchi Gummi Soccer Club.

Yet, this is Minnesota, a state that has modeled its professional football team (and said team’s stadium) after one of most well-known pieces of Norwegian heritage, the Vikings. Surely, a nation that has had so much of its Scandinavian background (lutefisk!) bleed over into Minnesotan culture can’t be that different, right?

Well, yes and no. Yes, the whole team is very kind and friendly, and everyone speaks fluent English. At first glance, sure, Bjarg could pass as a team from the upper Midwest. And the team has undeniable connections to Minnesota, none stronger than that of Bjarg’s coach, Joergen Brandshaug.

“It’s pretty special for me too because my dad lives here. He’s American, so I brought my family and my wife and my two daughters. One of my daughters plays on the team too, so he’s really (excited) to see the team play,” Brandshaug says after arriving at the Minneapolis-St. Paul airport, clearly beaming with the excitement of his soon-to-be reconnection with his father.

Sure, there are plenty of cultural similarities, perhaps none more heartwarming than Brandshaug’s long-awaited family reunion. The differences, however, are much more subtle, but one stands out with almost every player.

“It’s much warmer than we’re used to here.”

Virtually every player makes this comment. See, in a city located amongst Norwegian fjords on the coast of the North Sea, water – from both the sea and the sky – influences culture. Even in the peak of summer, Bergen rarely has a day warmer than 70 degrees Fahrenheit and seldom a day below 30 degrees in the winter. Still, that climate forces the team to practice under surprising conditions that are quite different from that of USA CUP. 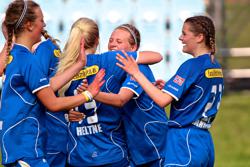 The team celebrates after a 4-2 win against DUSC in its second game of the day. Bjarg drew its first game 1-1 against Hudson Raiders.

“We did train a lot in the heat and on grass,” Ida Heltne, one of the team’s defenders, says before a language barrier gets in the way. “We have … not grass. I don’t know what it’s called in English.”

Bergen’s temperate climate means Bjarg exchanges comfortable year-round temperatures for rainfall – nearly 90 inches annually. Not to mention the limited sunlight for much of the year, averaging fewer than 20 hours of daylight per month in December and January. All of that adds up to a club that relies almost exclusively on turf for its practices and matches.

Yet, these differences don’t faze the girls of IL Bjarg. Instead, it’s those new experiences the girls say they’re most excited about at USA CUP. For most of the players, that means meeting new teams and players from around the world, but there are new things they’re excited to see off the pitch as well.

When asked what she’s looking forward to most about her team’s trip to Minnesota, striker Martine Solberg has her answer ready without hesitation. “Mall of America, to shop,” she says before a small chuckle. Heltne chimes in next to her with an explanation. “Forever 21, Victoria’s Secret, Abercrombie, Hollister. We don’t have those stores in Norway, so it’s quite big for us.”

Some of the players also mention a visit to Lake Superior and their awe at seeing one of the Great Lakes for the first time. Other players take it a step further and say their time in Duluth has motivated them to explore other parts of Minnesota during their trip, just to see the landscape.

And that’s part of the global culture of USA CUP. Everyone has a different experience. For Bjarg, their global experience isn’t what you’d expect. Language and appearance aren’t different – those things come naturally. Instead, they’re looking forward to the things most Minnesotans probably take for granted. Lakes, retail stores, playing outside in the summer on real grass. Those are what are standing out most to this team from Bergen, Norway, another one of the many unique experiences every team has at USA CUP.