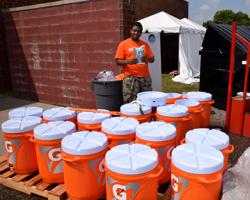 Long-time Schwan’s USA CUP participants may have noticed a big change on the National Sports Center (NSC) campus. Pepsi is the new soft drink sponsor of the NSC, which as the parent company of Gatorade, brings along the sports-fuel beverage to Schwan’s USA CUP.

Gatorade has set up 22 Thirst Quencher Stations around the campus, basically one station for each pair of fields. Gatorade beverages are free to players and the public. The refueling stations are being kept stocked by two mixing stations that constantly move full coolers out to the fields.

As the temperature and humidity rises over the weekend Gatorade may become beverage of choice at Schwan’s USA CUP.

The Schwan’s USA CUP Media Team scouted out the Sport Expo Center about 4 p.m. to pick the top three most popular stations, and our judgment is that we couldn’t pick a winner! Every vendor and activity station was rocking, so we declared a dead heat. Players had to muscle their way up to the pin trading table, the bag pick up table had players four deep, and even in the hot weather we can confirm it’s never too hot for cotton candy or Lolligobs. In the Inaria INZONE Superstore, customers outnumbered the awesome mannequins by about 30 to one.

Take a look at some of the scenes from Friday at the Sport Expo Center. 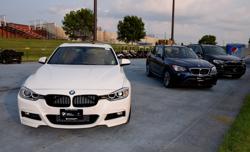 If you attended a game in the National Sports Center Stadium on Friday, you may have noticed three shiny new BMW automobiles parked along the back side of the grandstand. No, Schwan’s USA CUP doesn’t have a sponsorship with BMW. These cars were dropped off by Carousel Motor Group for a promotion at Saturday night’s Minnesota United FC vs. Ottawa game.

And speaking of Minnesota United FC, you may also have noticed 500 additional seats have been added to the east bleachers. In their five home games this season, Minnesota’s professional soccer team has drawn over 9,000 fans per game. With demand for tickets stressing the capacity of the stadium, United added the seats just last week. They’ll be used for the first time at Saturday’s game.