Schwan’s USA CUP will become the first international youth soccer tournament in the U.S. to add the Handshake for Peace

BLAINE, Minn. (May 15, 2014) – Schwan’s USA CUP, the largest youth soccer tournament in the Western Hemisphere, announced it will join with the Fédération Internationale de Football Association (FIFA), the Norwegian Football Association and the Nobel Peace Center to add the Handshake for Peace at this year’s USA CUP, July 11-19 at the National Sports Center in Blaine, Minn.

Schwan’s USA CUP will become the first international youth tournament in the U.S. to embrace the Handshake for Peace. 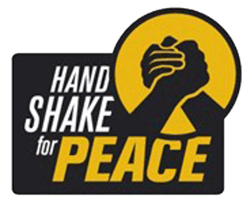 “Handshake for Peace is a small act but is a strong symbol and signal to the world,” said FIFA President Sepp Blatter. “We encourage all our members all over the world to implement this symbolic act in their tournaments and qualifying games. This symbol will show that even contests for the highest of rewards on the field of play can be ended in a peaceful and respectful manner.”

In addition to Stenberg, the Norwegian Football Association is sending Jan Aage Fjortoft, a member of Norway’s 1994 World Cup team, as an official delegate.

“As one of the largest international youth soccer tournaments in the world, Schwan’s USA CUP is embracing the Handshake for Peace and enthusiastically promoting it to all our players and coaches,” said Kara Radeke, USA CUP Director.” It will be especially meaningful and powerful for the youth players at USA CUP to share the same gesture of peace with the World Cup players in Brazil.”

“The Football Association of Norway wishes USA CUP all the best in their great effort of building a strong platform of fair play, respectful behavior, friendship and peace in the 30th anniversary of USA CUP this year,” said Kjetil Siem, the General Secretary of the Norwegian Football Association.