Ovrevoll-Hosle from Oslo, Norway and Phoenix Fiera from Omaha, Nebraska, both 16 year old girls teams, will serve as role models and take the lead in promoting the program to other teams, coaches and spectators. The two teams will also take the stage to lead the Handshake for Peace among the 12,000 players and spectators attending the tournament’s Opening Ceremony July 15.

“Our team has been looking forward to this tournament for months, and to hear that we have been selected to represent our country in the Handshake for Peace with players from Norway only adds to our excitement. It is more than an honor to participate in this act of sportsmanship and peace,” said Fiera co-captain Emmy Henley. 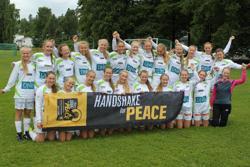 After winning a championship at Norway Cup in 2011 Ovrevoll-Hosle set a goal to travel to Schwan’s USA CUP in 2014. Their three year project to raise the funds for the U.S. trip demonstrated the dedication that helped Ovrevoll-Hosle earn selection to be one of the Handshake for Peace ambassador teams.

To finance the trip the whole team did a variety of part time jobs such as school patrol jobs, selling toilet paper, and doing garbage clean up on the streets in their neighborhoods, all the time with a smile.

“Even though the handshake of peace is a small gesture, by participating in it we can show the world that we can come together as one,” said Fiera co-captain Paige Wallingford. “Phoenix Fiera is honored to represent the US in this amazing act of friendship.”

“As one of the largest international youth soccer tournaments in the world, Schwan’s USA CUP is embracing the Handshake for Peace and enthusiastically promoting it to all our players and coaches,” said Kara Radeke, USA CUP Director. “The selection of these two ambassador teams is important. In the area of sportsmanship and fair play young athletes look to their peers for leadership. These two teams have embraced that leadership role and the responsibility that comes with it.”

In addition to Stenberg, the Norwegian Football Association is sending Jan Aage Fjortoft, a member of Norway’s 1994 World Cup team, as an official delegate.